In 1974, Long Island National Cemetery was the only national cemetery on Long Island with available space for burials--but its maximum burial capacity was soon to be exhausted. As a result, plans were developed by the National Cemetery System to construct a new regional cemetery to serve the greater New York area—home, then, to nearly three million veterans and their dependents. On Dec. 7, 1977, a 902-acre tract of land was transferred from the U.S. Naval Weapons Industrial Reserve Plant at Calverton to the Veterans Administration for use as a national cemetery.

The National Cemetery System realized that Calverton National Cemetery would become one of its more active cemeteries. For that reason, they designed and built a feature called a committal “wheel” of shelters that permits multiple burial services to be held simultaneously. To the left of the main cemetery entrance, around the Veteran’s Circle, are seven committal shelters. After the funeral service, the caskets are moved into the hub of the wheel and then transported to their respective gravesites. One floral arrangement is taken to the gravesite. In 1983, the walls of the committal shelters were reconstructed to serve as columbaria for the inurnment of cremated remains. Calverton is the largest, and one of the most active national cemeteries currently overseen by the National Cemetery Administration.

For more information on Calverton National Cemetery, click on the link below!

Persons Eligible for Burial in a National Cemetery

(1)  Any member of the Armed Forces of the United States who dies on active duty.

(2)  Any Veteran who was discharged under conditions other than dishonorable.  With certain exceptions, service beginning after September 7, 1980, as an enlisted person, and service after October 16, 1981, as an officer, must be for a minimum of 24 continuous months or the full period for which the person was called to active duty (as in the case of a Reservist called to active duty for a limited duration).  Undesirable, bad conduct, and any other type of discharge other than honorable may or may not qualify the individual for Veterans benefits, depending upon a determination made by a VA Regional Office.  Cases presenting multiple discharges of varying character are also referred for adjudication to a VA Regional Office.

b.  Members of Reserve Components and Reserve Officers’ Training Corps

(1)  Reservists and National Guard members who, at time of death, were entitled to retired pay under Chapter 1223, title 10, United States Code, or would have been entitled, but for being under the age of  60.   Specific categories of individuals eligible for retired pay are delineated in section 12731 of Chapter 1223, title 10, United States Code.

(2)  Members of reserve components, and members of the Army National Guard or the Air National Guard, who die while hospitalized or undergoing treatment at the expense of the United States for injury or disease contracted or incurred under honorable conditions while performing active duty for training or inactive duty training, or undergoing such hospitalization or treatment.

(3)  Members of the Reserve Officers’ Training Corps of the Army, Navy, or Air Force who die under honorable conditions while attending an authorized training camp or on an authorized cruise, while performing authorized travel to or from that camp or cruise, or while hospitalized or undergoing treatment at the expense of the United States for injury or disease contracted or incurred under honorable conditions while engaged in one of those activities.

(1)  A Commissioned Officer of the National Oceanic and Atmospheric Administration (formerly titled the Coast and Geodetic Survey and the Environmental Science Services Administration) with full-time duty on or after July 29, 1945.

(a)  Was assigned to an area of immediate military hazard as determined by the Secretary of Defense while in time of war, or in a Presidentially declared national emergency; or,

(b)  Served in the Philippine Islands on December 7, 1941, and continuously in such islands thereafter.

(1)  A Commissioned Officer of the Regular or Reserve Corps of the Public Health Service who served on full-time duty on or after July 29, 1945.  If the service of the particular Public Health Service Officer falls within the meaning of active duty for training, as defined in section 101(22), title 38, United States Code, he or she must have been disabled or died from a disease or injury incurred or aggravated in the line of duty.

(2)  A Commissioned Officer of the Regular or Reserve Corps of the Public Health Service who performed full-time duty prior to July 29, 1945:

(b)  On detail for duty with the Army, Navy, Air Force, Marine Corps, or Coast Guard; or,

(c)  While the Service was part of the military forces of the United States pursuant to Executive Order of the President.

(3)  A Commissioned Officer serving on inactive duty training as defined in section 101(23), title 38, United States Code, whose death resulted from an injury incurred or aggravated in the line of duty.

(a) Was a person who served before July 1, 1946, in the organized military forces of the Government of the Commonwealth of the Philippines, while such forces were in the service of the Armed Forces of the United States pursuant to the military order of the President dated July 26, 1941, including organized guerilla forces under commanders appointed, designated, or subsequently recognized by the Commander in Chief, Southwest Pacific Area, or other competent authority in the Army of the United States, and who died on or after November 1, 2000; or,

(b) Was a person who enlisted between October 6, 1945, and June 30, 1947, with the Armed Forces of the United States with the consent of the Philippine government, pursuant to section 14 of the Armed Forces Voluntary Recruitment Act of 1945, and who died on or after December 16, 2003.

(2)  The surviving spouse of an eligible Veteran who had a subsequent remarriage to a non-Veteran and whose death occurred on or after January 1, 2000, is eligible for burial in a national cemetery, based on his or her marriage to the eligible Veteran.

(3)  The minor children of an eligible Veteran.  For purpose of burial in a national cemetery, a minor child is a child who is unmarried and:

(b)  Who is under 23 years of age and pursuing a full-time course of instruction at an approved educational institution.

Of any age but became permanently physically or mentally disabled and incapable of self-support before reaching 21 years of age, or before reaching 23 years of age if pursuing a full-time course of instruction at an approved educational institution.  Proper supporting documentation must be provided.

(b)  whose death was the result of a hostile casualty or a training-related injury, and

(c)  who is interred in a national cemetery, in a gravesite with available space for subsequent

(d)  at the time of the parent’s death, had no spouse, surviving spouse, or child who is buried, or who, upon death, may be eligible for burial in a national cemetery.

(2) The term “hostile casualty” means a person who, as a member of the Armed Forces, dies as the direct result of hostile action with the enemy, while in combat, while going to or returning from a combat mission if the cause of death was directly related to hostile action, or while hospitalized or undergoing treatment at the expense of the United States for injury incurred during combat, and includes a person killed mistakenly or accidentally by friendly fire directed at a hostile force or what is thought to be a hostile force.  The term “hostile casualty” does not include a person who dies due to the elements, a self-inflicted wound, combat fatigue, or a friendly force while the person was absent-without-leave, deserter, or dropped-from-rolls status or was voluntarily absent from a place of duty.

(3) The term “training-related injury” means an injury incurred by a member of the Armed Forces while performing authorized training activities in preparation for a combat mission.

Persons Not Eligible for Burial in a National Cemetery

A former spouse of an eligible individual whose marriage to that individual has been terminated by annulment or divorce, if not otherwise eligible.

b.  Other Family Members

Family members of an eligible person except those defined as eligible in Section III, paragraph g (Spouses and Dependents).

A person whose only separation from the Armed Forces was under dishonorable conditions or whose character of service results in a bar to Veterans benefits.

A person who was ordered to report to an induction station, but was not actually inducted into military service.

Under 38 U.S.C. § 2411, interment or memorialization in a VA national cemetery or in Arlington National Cemetery is prohibited if a person is convicted of a Federal or State capital crime, for which a sentence of imprisonment for life or the death penalty may be imposed and the conviction is final.  Federal officials may not inter in Veterans cemeteries persons who are shown by clear and convincing evidence to have committed a Federal or State capital crime but were unavailable for trial due to death or flight to avoid prosecution.  Federally funded State veterans cemeteries must also adhere to this law.  This prohibition is also extended to furnishing a Presidential Memorial Certificate, a burial flag, and a headstone or marker.

Under 38 U.S.C. § 2411, interment or memorialization in a VA national cemetery or in Arlington National Cemetery is prohibited if a person is convicted of a Tier III sex offense, who was sentenced to a minimum of life imprisonment and whose conviction is final.  Federally funded State and Tribal organization Veterans cemeteries must also adhere to this law.  This prohibition also applies to Presidential Memorial Certificate, burial flag, and headstone and marker benefits.

Any person convicted of subversive activities after September 1, 1959, shall have no right to burial in a national cemetery from and after the date of commission of such offense, based on periods of active military service commencing before the date of the commission of such offense, nor shall another person be entitled to burial on account of such an individual.  Eligibility will be reinstated if the President of the United States grants a pardon.

A person whose only service is active duty for training or inactive duty training in the National Guard or Reserve Component, unless the individual meets the eligibility criteria listed in Section III.1.b. of this information sheet.

View this document in its entirety: VA-NCA-15-1 Interments in VA National Cemeteries 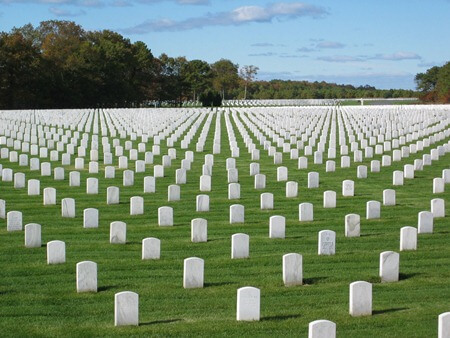 Need a copy of your Military Service Records?